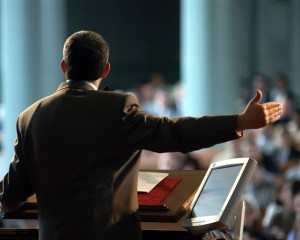 Preacher. I used to be one. Whether when living at home or when at college or when married, for most of my life, preaching has put food on my table. As I transition out of full-time preaching, I’m facing one of the most painful times in my life; you see, I love preaching and I sorely miss the opportunity to open up Scripture to those who hear me. God loves preaching, too – in fact, His own Son was a preacher and began proclaiming the gospel of God after John’s arrest (Mk 1:14-15).

As I give thanks to God for the bountiful blessings in my life, I would be most foolish to ignore the influence preachers have had in my life.

Several preachers have influence me as I have sought to grow in the grace and knowledge of God:

I’ve mentioned preachers who have greatly influenced my outlook on life, but there are many others who have played their own role. I have been privileged to hear some of the greatest preachers in the brotherhood: Phil Sanders, Dale Jenkins, Glenn Colley, Tom Holland, Basil Overton, David Underwood, Jerry Davidson, and Charles Coil.

Facebook is a great tool for being encouraged. There are brothers whom I have never heard in person (some of whom I have never met in the flesh) who encourage me by the great work they are doing in the kingdom: Scott Elliott, Steven Hunter, Michael Whitworth, James Farris, Adam Faughn, and Wes McAdams, for example.

God chose the foolishness of preaching to save those who believe (1 Cor 1:21). May God continue to bless the preaching of His Word!